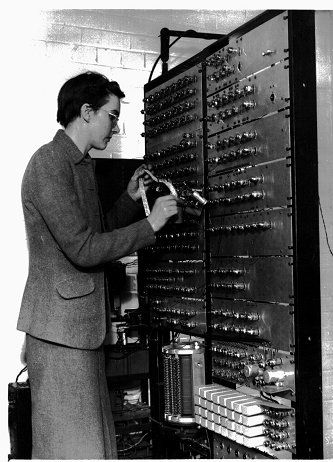 Kathleen Hylda Valerie Booth created the assembly language and the design of the assembler for the first ARC computers at Birkbeck college in London. She worked there from 1946- 1962.

Kathleen gained her bachelor’s degree in Maths from the University of London and in 1950 she earned her PhD in Applied Mathematics. From 1942-62 Kathleen worked at Birkbeck College as part of one of the smallest British computer groups of the time. The team created the ARC (Automatic Relay Computer), the SEC (Simple Electronic Computer), and the APE(X)C (All-purpose Electronic (Rayon) Computer), remarkable achievements given the size of the team and the resources it had access to.

Kathleen's husband, Andrew Booth, often built the machines and Kathleen programmed them. After returning from a visit to the United States in 1947 where Kathleen and Andrew met John von Neumann, she authored a paper detailing  changes to the ARC using von Neumann architecture, to create the ARC2. She is credited with writing the first assembly language.

In 1957, Kathleen co-founded the School of Computer Science and Information Systems at Birkbeck College and in 1958 published a book on programming the APE(X), notable for being one of the earliest books on programming and highly unusual in having a female author.

Following her time at Birkbeck, Kathleen moved to Canada where she became a Research Fellow, Lecturer, and Associate Professor first at the University of Saskatchewan and then Professor of Mathematics at Lakehead University. Her research into neural networks led to successful simulations of how animals recognise patterns.

Kathleen Booth was one of the women profiled in our Women in Computing Festival 2017.